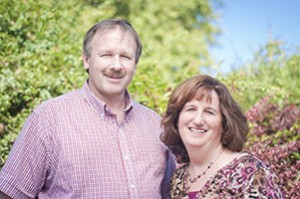 Dan and Pam Waterman, the founders and directors of Benjamin Ministries, live in Upstate New York, and are the parents of ten children. Eight children are here and two are in heaven. Two of their daughters are now married, and have started families of their own. Their first grandchild, a beautiful baby girl, was born in June of 2014.

It was the death of their son Benjamin in 1997 (read his story here) that prompted Dan and Pam to start Benjamin Ministries in 1999, a Christ-centered bereavement ministry dedicated to helping others in their time of grief and loss.

In 1999, they began delivering bereavement packages containing a variety of grieving materials and resources. The ministry was officially adopted and sponsored by their home church in Chili, NY, in 2001. In February 2001, they experienced the heartache associated with miscarriage, and mourned the loss of a child never seen or held. The ministry continued, now with a deeper understanding of the loss associated with a miscarriage.

In 2011, they had the opportunity to create a unique bereavement conference, Joy Through the Mourning, scheduled to take place in October 2011. They were amazed to see God’s hand in every little detail of the conference, which helped to further the opportunity for Christ-centered bereavement support to the surrounding community and into a lost and hurting world.

Dan and Pam remain dedicated to helping people in times of loss, and look forward to the day when they will be reunited with their son Benjamin and baby unknown, as well as many other friends and family, in Heaven.

They invite you to Selah…pause, and take a moment to ponder God.

A ministry partner of